As well as looking at beautiful cherry blossoms, there are many festival foods to be tried at the Kawazu Sakura Festival.

We tried a LOT of them, and chose our best 5 to introduce in our new video.

Many of these can be eaten at any festival in Japan, but there are a few special ones too.

What are our must- try festival foods? 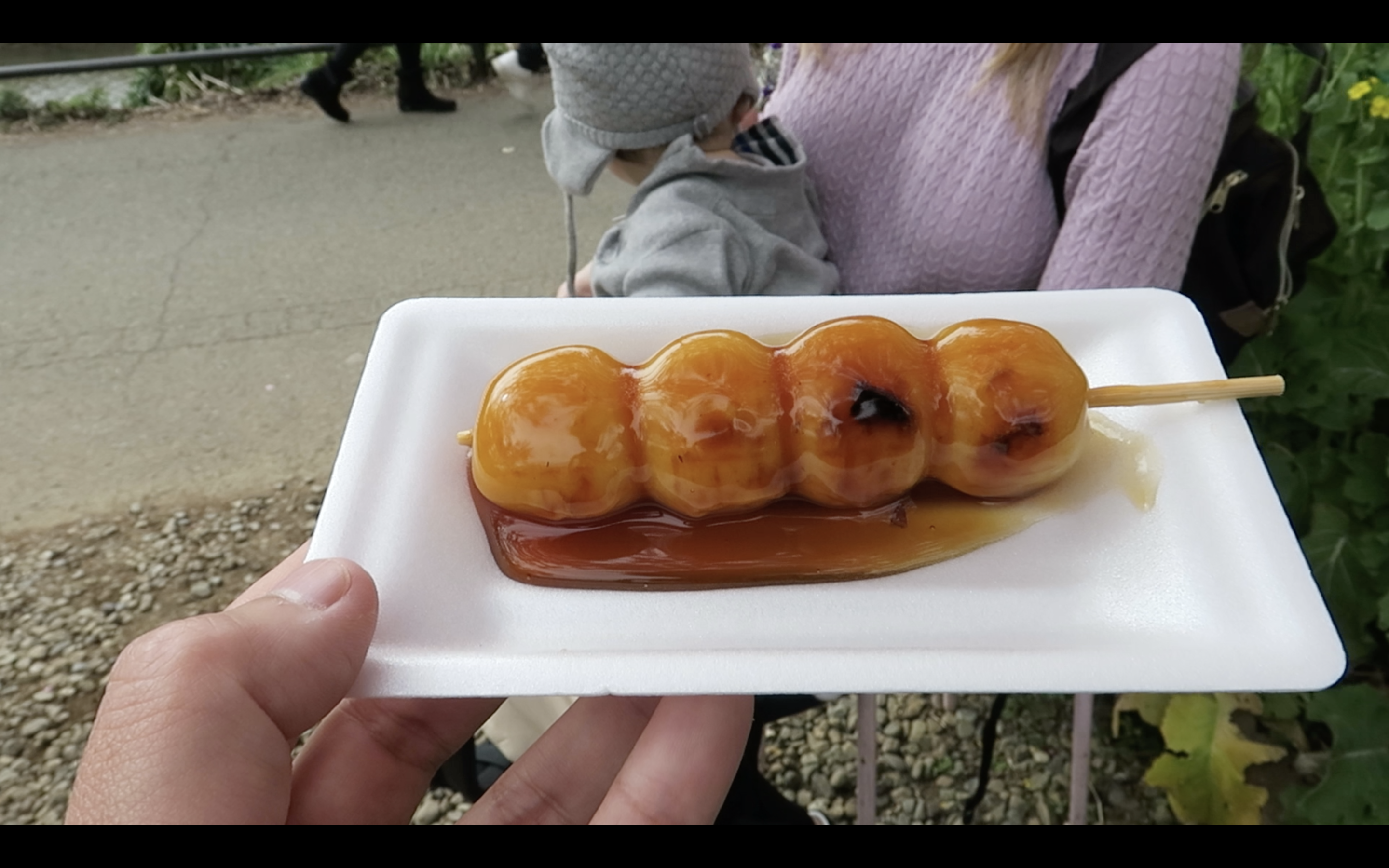 Odango are balls of mochi on a stick.

Mochi is a kind of paste made from mochigome or mochi rice. The sticky paste is rolled into balls and put on a stick. It’s then dipped in a sweet sauce called tare.

There are usually three or four balls on a stick of dango. In Japan in the past, the number three was considered lucky so older, more traditional sweet shops will sell dango with three balls.

balled” dango to get a taste of history! There are also different ways to prepare and serve dango in different parts of japan. Three colored dango 🍡 from Kyoto are pink, white and green.

Senbei is a Japanese rice cracker, but this senbei is about 10 times the usual size! “Ama” 海女 means “Sea Woman”, and it was a profession in Japan years ago.

The Ama‘s job was to dive to the ocean floor to collect shellfish and other seafood to sell.

These Ama senbei are from Shimoda and come in flavors such as shrimp, squid, sazae (shellfish) and Sakura!

Senbei is a Japanese rice cracker, but this senbei is about 10 times the usual size! “Ama” 海女 means “Sea Woman”, and it was a profession in Japan years ago.

The Ama‘s job was to dive to the ocean floor to collect shellfish and other seafood to sell.

These Ama senbei are from Shimoda and come in flavors such as shrimp, squid, sazae (shellfish) and Sakura!

These are also made from mochi.

There is anko (red bean paste) and a strawbery inside. Seán tried the strawberry too.

The word Daifuku 大福 means “Great Luck”. But if you use different kanji (Chinese characters) it can also mean “Big tummy”. In the past people ate Daifuku because they kept you full for a long time! 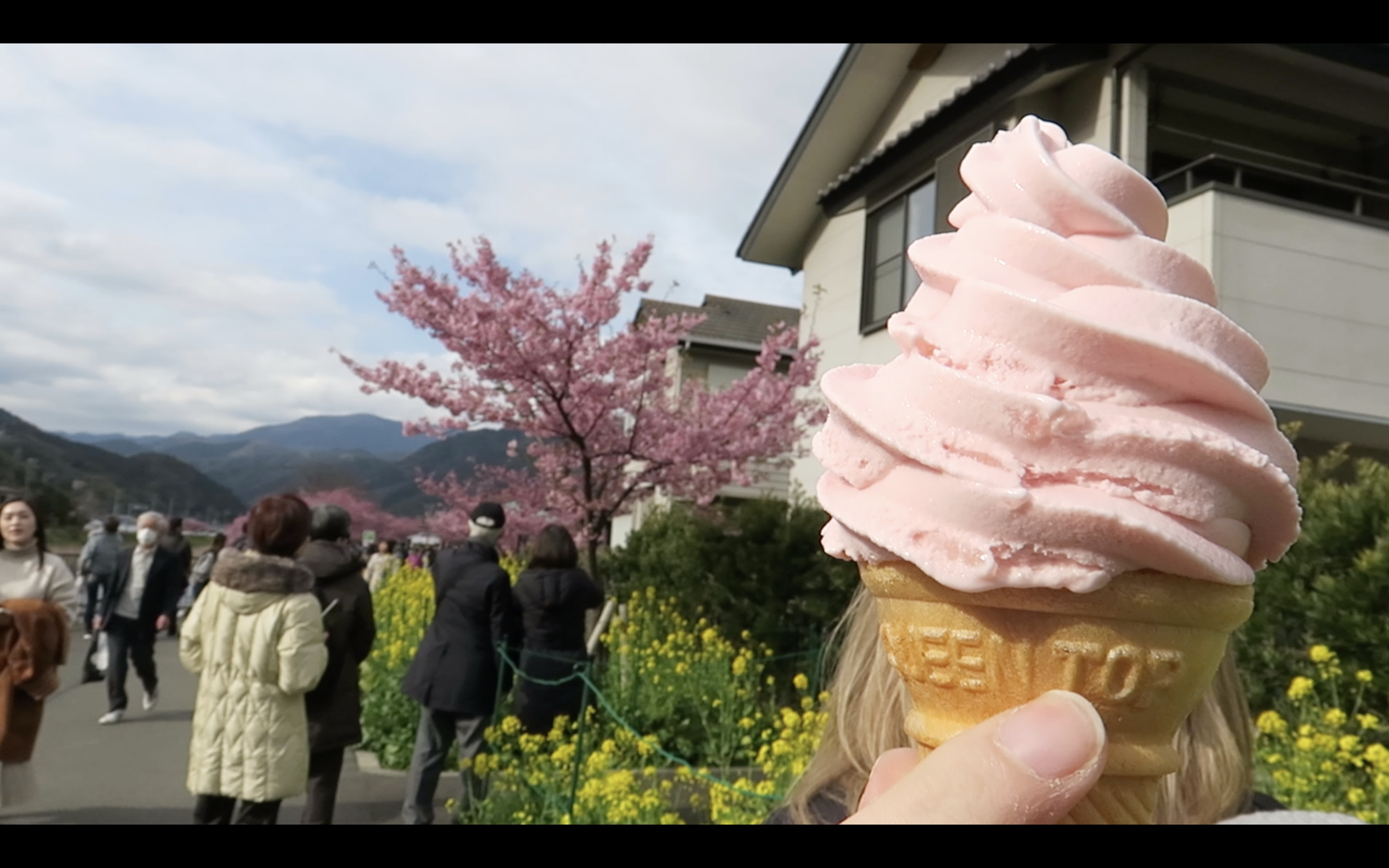 Side note! Personally my favorite ice cream ever is Teddy’s ice cream in Dun Laoghaire in Dublin where I’m from! 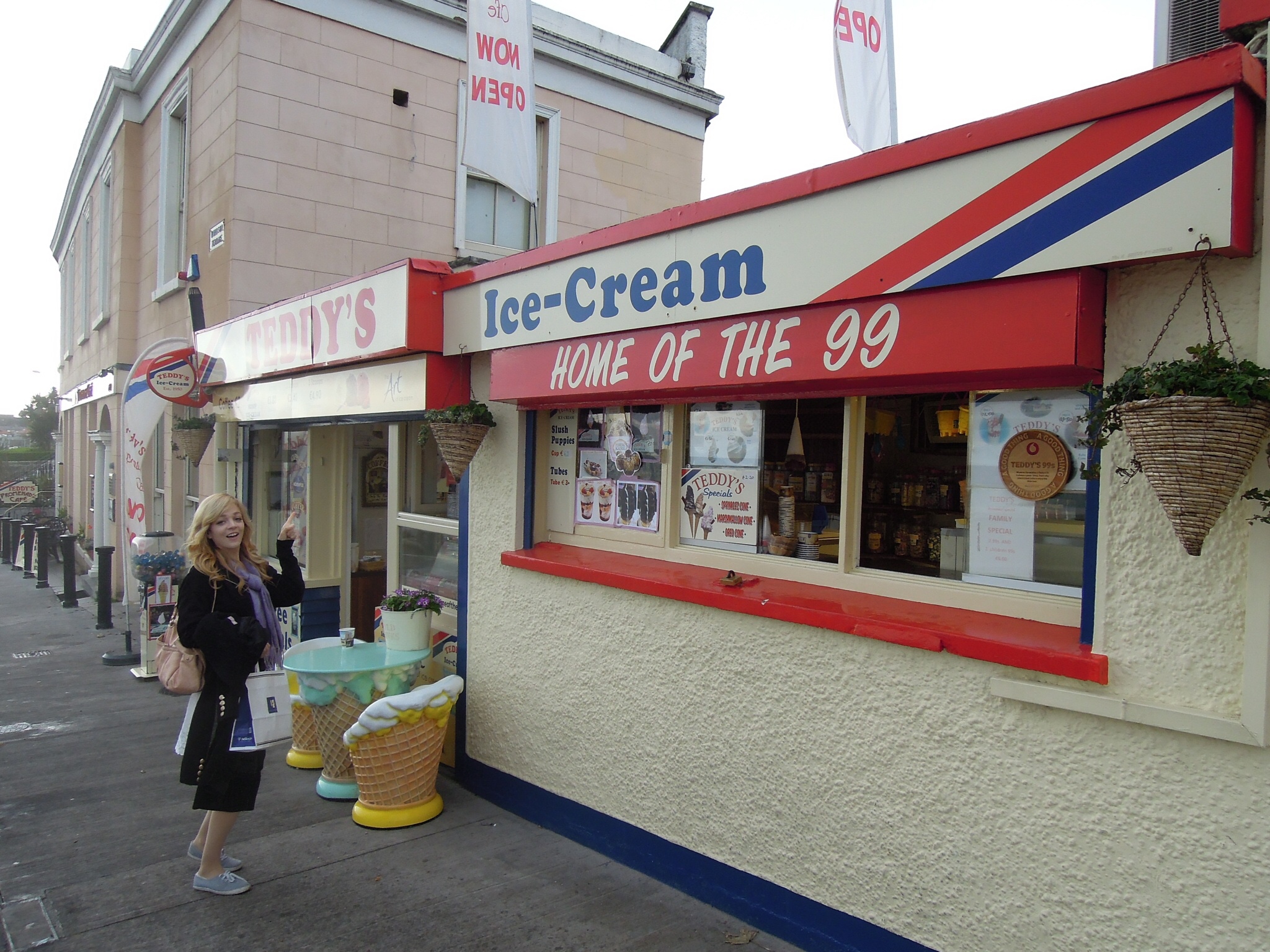 But after trying this Sakura ice cream I must say it’s a close second.

What does cherry blossom taste like you ask? Hmm. Difficult.

It has a slightly salty taste. I think you’ll have to try it yourself to fully understand!

I was really pleasantly surprised with this ice cream💕

And it looks super cute too.

I am a huge Taiyaki fan, so this was always going to come high in the list.

Taiyaki is like a pancake shaped like a fish (a “tai“- red snapper) and filled with anko red bean paste.

Usually Taiyaki is the same colour as a pancake and served freshly cooked so it’s lovely and warm.

This Taiyaki is pink and filled with pink Sakura flavored anko! This festival really has Sakura everywhere!

My husband was told as a child that if you eat from the head first it will make you smarter! 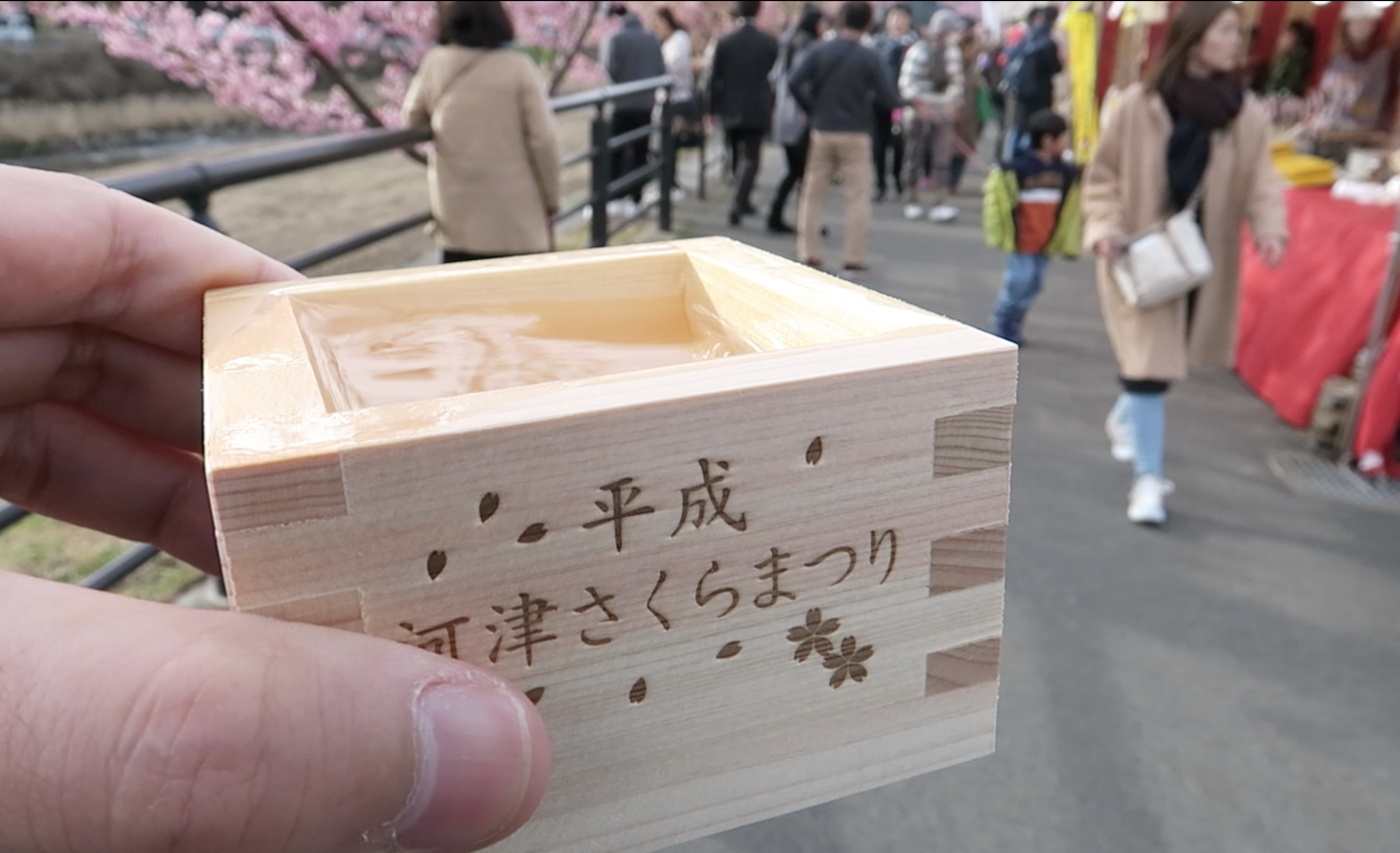 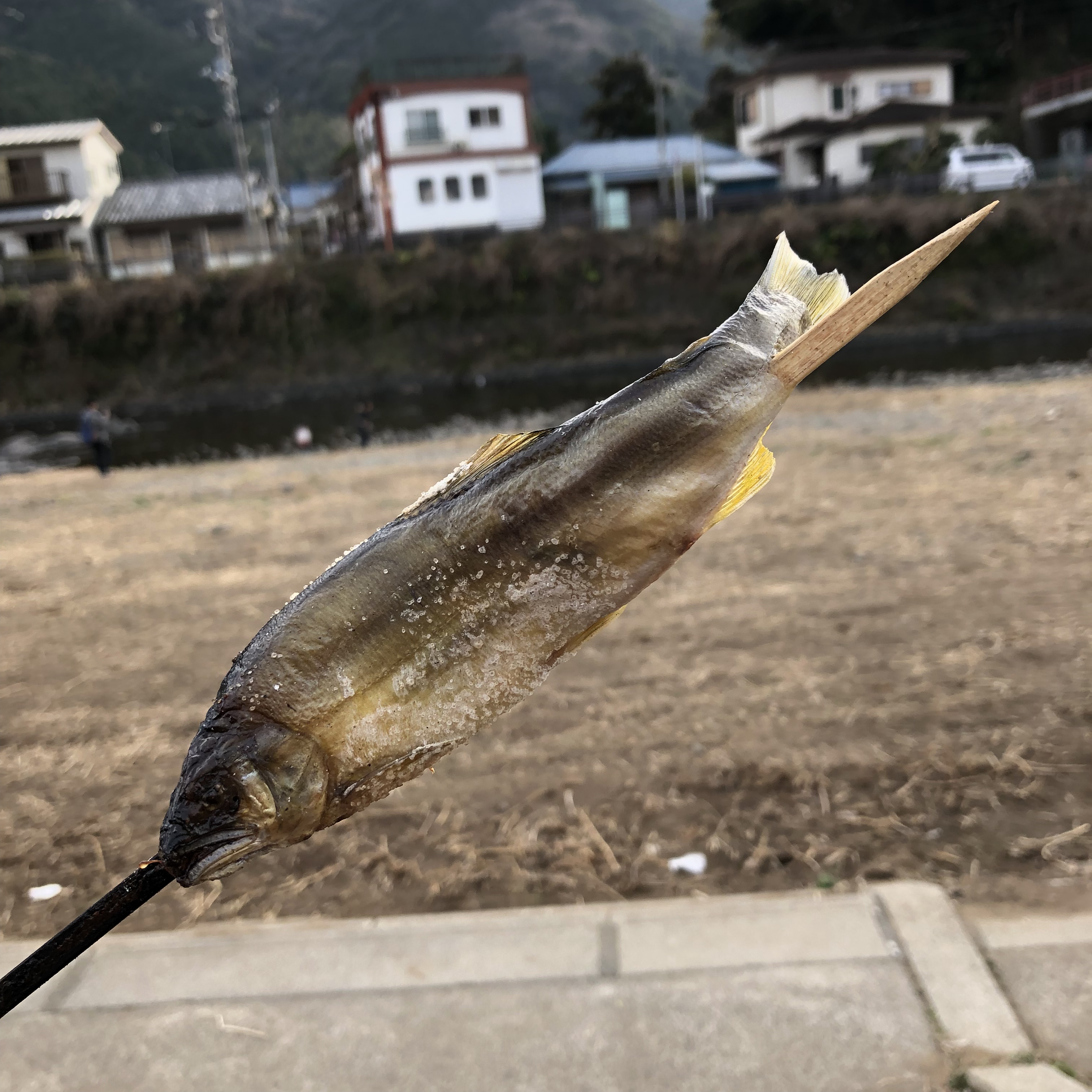 I also had a festival favorite chocobanana.

And, on the way home, as if we hadn’t eaten enough, a must do when traveling in Japan, tachigui soba “standing up soba”. Soba are buckwheat noodles and one of my favorite Japanese foods. 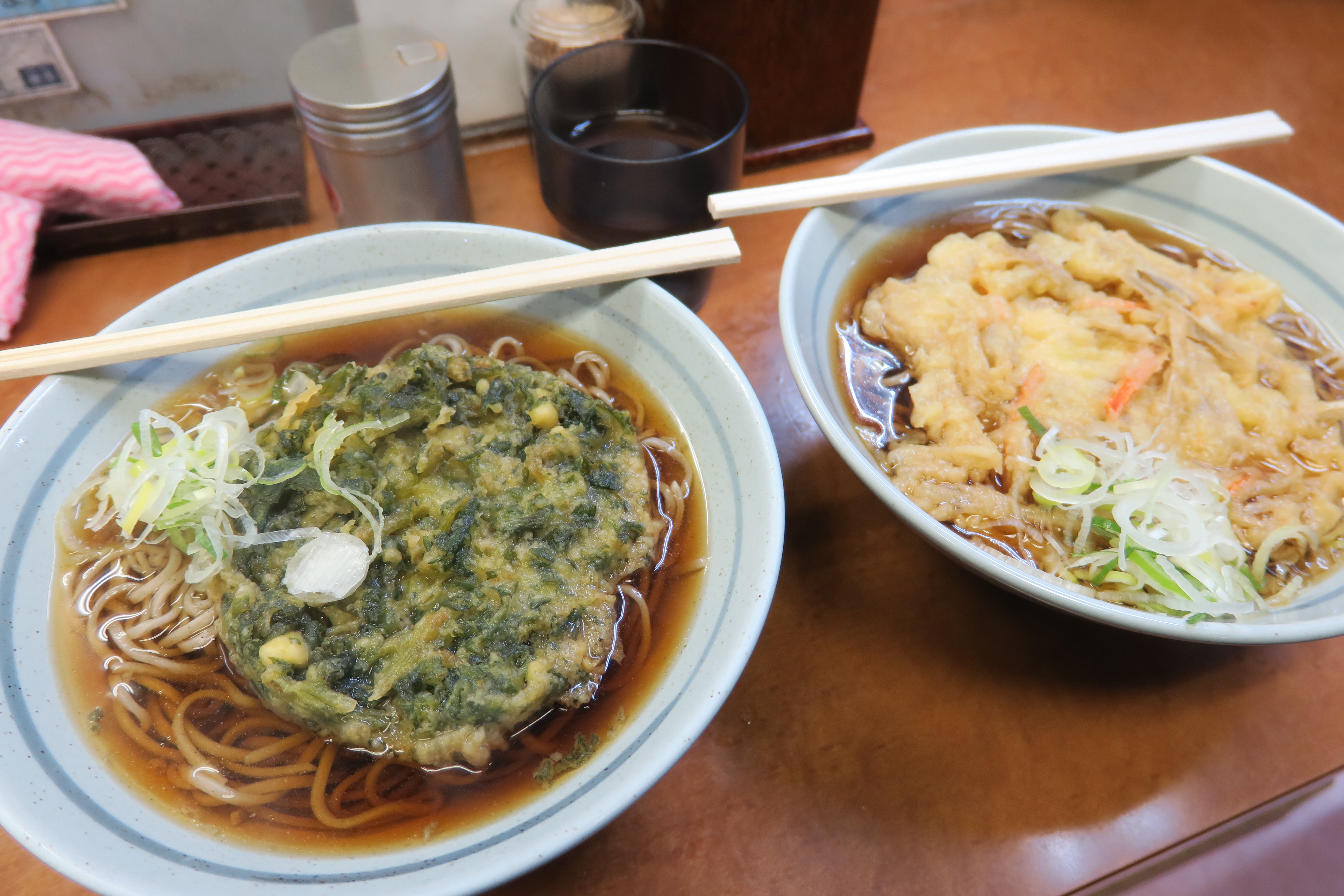 Stand- up soba shops are common in train stations in japan, you can grab a bite before your train!

Soba can be eaten hot or cold and are in a special tsuyu soup. There can be a variety of toppings on top, like tempura, soft boiled egg, fried tofu, nori seaweed.

We ALSO ate konnyaku (I think it’s called Konjac!) which is made from a root vegetable like a potato. It’s crushed and mixed with water and left to set, and becomes like a jelly.

Which is put on a stick! Then it’s covered with miso (a paste made from soybeans). It’s very low in calories and good for your digestive system, so you can buy lots of konnyaku snacks and sweets, like konnyaku jelly which has 0 calories and comes in a variety of flavors!

Check out our new video to see us eating our way through the top 5 foods at the festival!

We went to the Kawazu Zakura Festival, which runs every year from the 10th of February to the 10th of March. Sakura means cherry blossoms, and spring when the cherry blossom trees bloom is one of the most beautiful times to be in Japan. Japanese people talk of “Wabi Sabi“, which is a similar to the English “fleeting beauty” or transience, or the idea that beautiful things last only a moment before being gone. The idea comes from the Buddhist teaching of sanbouin (the three marks of existence), mujou (impermanence), kuu (suffering) and ku (emptiness or absence of form).

Cherry blossoms are a perfect incarnation of this concept, as they bloom and are beautiful for a short space of time, before falling to the ground. Japanese people enjoy the cherry blossom season and the beauty of the flowers, knowing that they are impermanent, like everything is. Japanese people look forward to the season every year, and when the trees bloom, they do Ohanami (flower viewing) in parks or near rivers, wherever cherry blossom trees are to be found.

The end of March/ beginning of April when the trees bloom coincides with the end of the working year, school year and fiscal year. Students graduate alongside the blooming and falling petals, and people enter into a new phase of life, whether it’s a new school, new grade level, new job. So the cherry blossoms have a huge significance here in Japan. There are countless graduation songs about cherry blossoms sung at ceremonies every year (that would bring a tear to the sternest of eyes), and companies and friends hold Hanami parties, sitting under the trees eating, drinking and bonding. Hubby and I actually got engaged after taking a walk under the cherry blossom trees🌸💕

Kawazu Town is located in Shizuoka Prefecture where we live, and is in the eastertn part of the prefecture, on the Izu Peninsula. 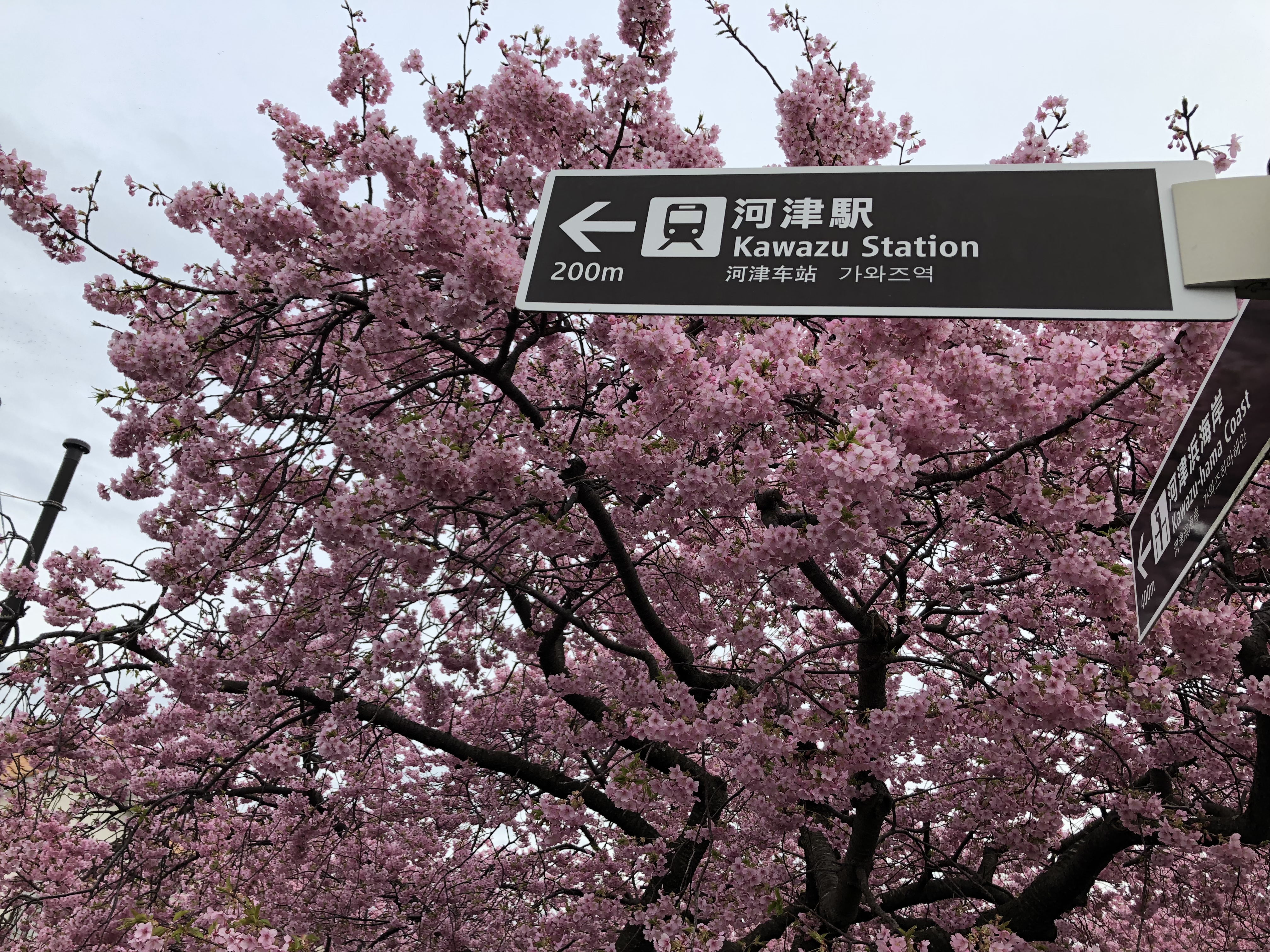 Izu is well known around Japan for having delicious seafood, onsen (hot springs) and lovely beaches. My husband’s grandparents live in Izu, so we go there quite a lot. It is a popular holiday destination for all Japanese people, and even the Emperor has a place there he visits in the summer. Shimoda at the southernmost point of Izu is super popular with surfers as it has beaches that are not too crowded and great waves.

Kawazu is home to the earliest blooming type of cherry blossom tree in Japan, in February compared to the usual April, and every year tens of thousands of people come from all over Japan to see the beautiful pink blossoms. You can even see the 60 year old ancestor tree from which all of the Kawazu Zakura trees came from. There are over 150 stalls, selling festival food of all kinds, special “sakura” sweets, and you can even purchase your own Kawazu Sakura sprig to bring home and grow yourself. 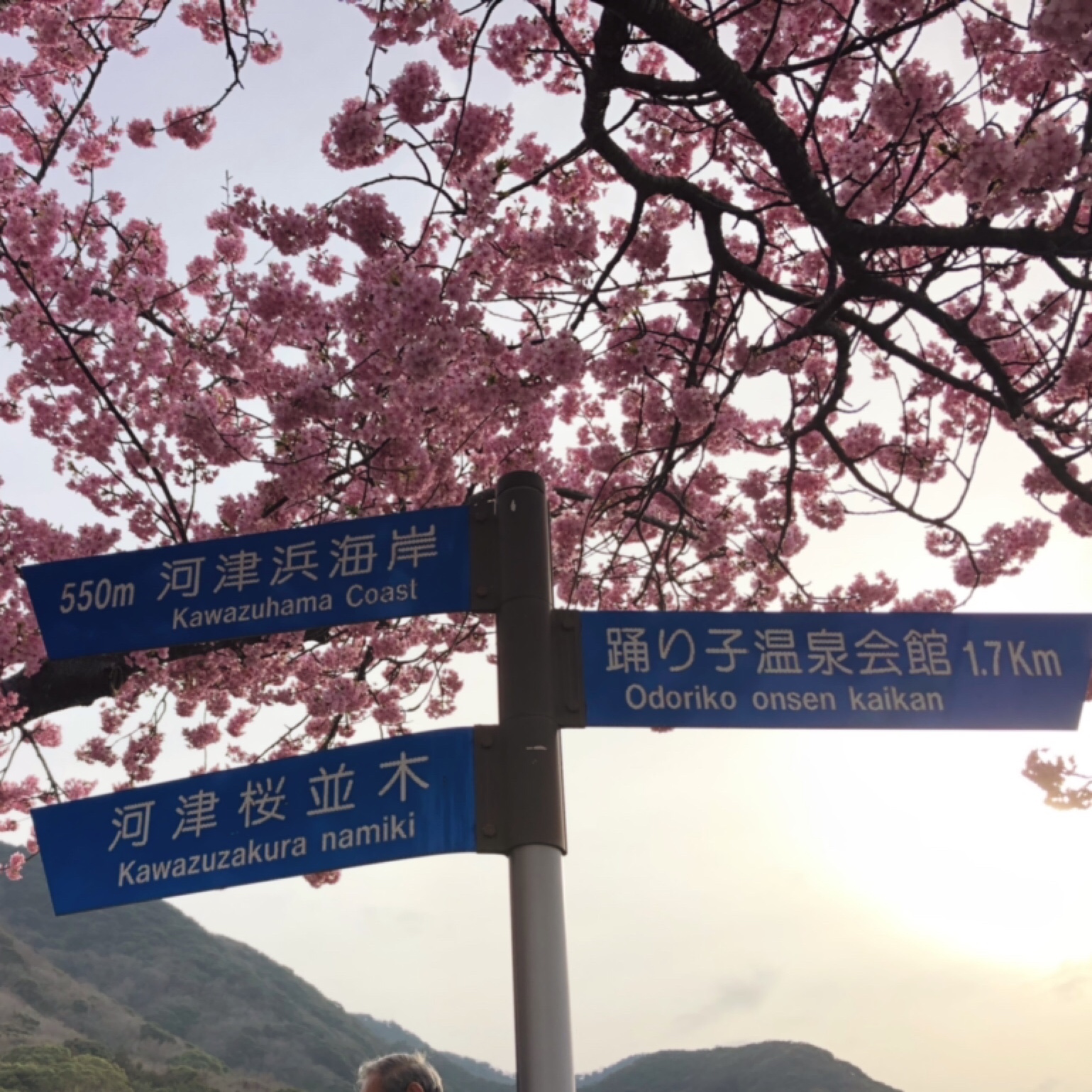 We left Shizuoka station at around 7am and took a train to Atami Station. If you are traveling from Tokyo you can take the Shinkansen “Bullet Train” from Tokyo station to Atami station. At Atami station, there is a ticket office where you can purchase a ticket for a train to get you to Kawazu station. Around this time of year there are many deals, offers and day trips you can take. You can also reach the festival by regular train. We opted to take the Resort 21 train which travels from Atami Station to Shimoda station all the way at the southern part of Izu Peninsula. This train is a little more expensive than the regular JR train. It has seats that face the window, so as you travel down the eastern part of Izu, you can look out at the sea and see the many islands that make up Izu. Our train was red and designed like a kinmedai (red snapper fish) which is a fish caught in Izu and a speciality in the area. The seats had cute fish characters on them. 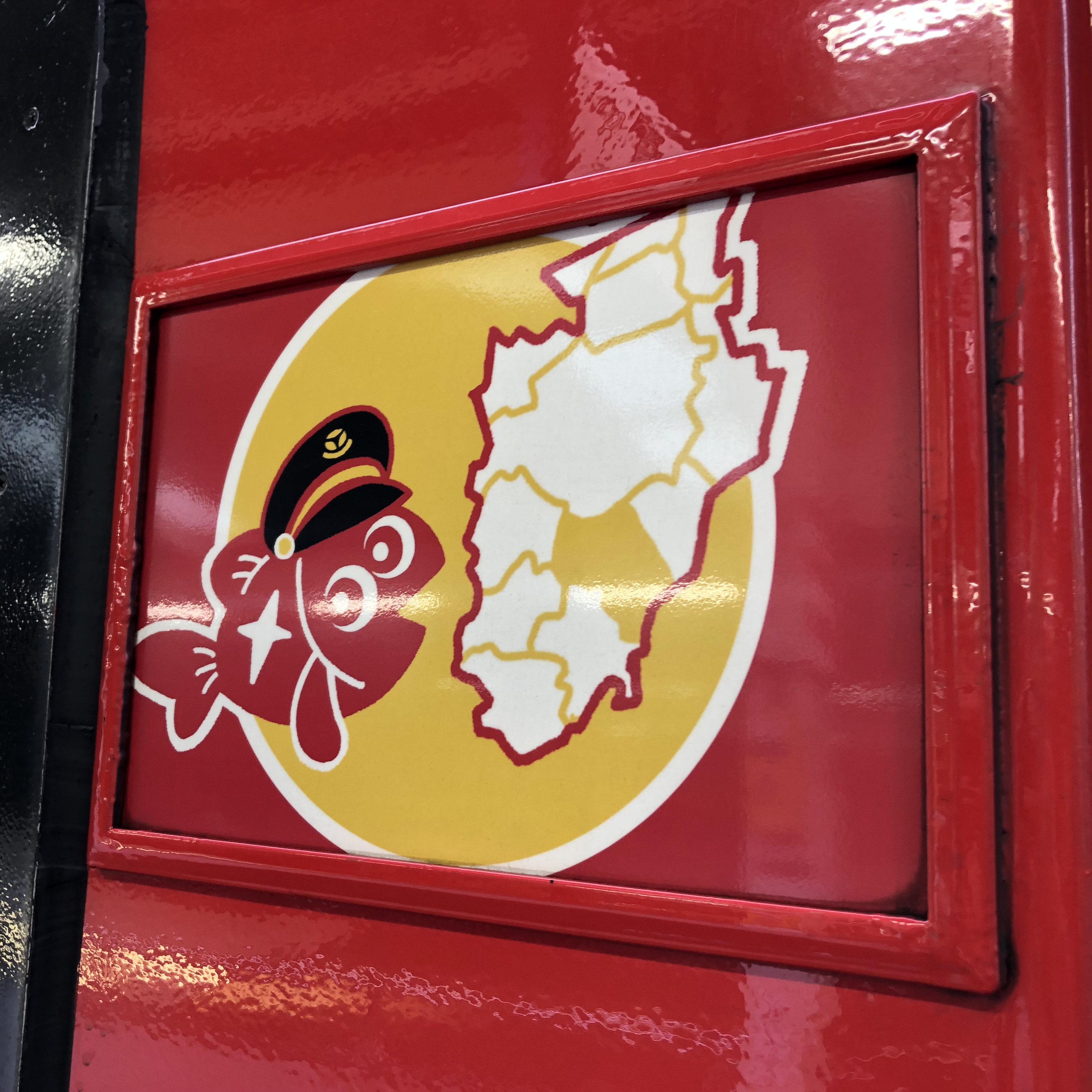 There is another train called the Odorikko “The Dancer” named after the book “The Izu Dancer”. I think it is more expensive and has to be booked in advance. I can’t recommend enough getting to the train early and snagging a good seat (if you want the ocean view), about 10 minutes after we had sat down a huge group of tourists spilled onto the train and many of them were left standing.

At Atami station we picked up Ekiben or station lunch boxes. You can get ekiben at most train stations in Japan to eat during your journey, and some stations sell special lunched with ingredients from the local area or famous cuisine. Hubby got raw red snapper and aji sushi and I got cooked eel, red snapper and salmon on rice. We ate our lunch on the train on the way to Kawazu, looking out to sea. How romantic! They were delicious and a great way to sample Izu’s famous seafood.

About an hour later we arrived at Kawazu station. It was quite crowded depite being a weekday and there were quite a few tour groups being rallied by their guides. Just outside the station we got our first glimpse of the Kawazu Zakura in full bloom. The weather was beautiful, we were so lucky. Seán kept pointing at the flowers, so we like to think that he thought they were pretty too.

Walking from the station to the main festival area by the river takes just 5 minutes, and the trees line the little road on the way to the river. There are some stalls here, selling things like Himono (dried fish), and ume youkan (plum jelly) . 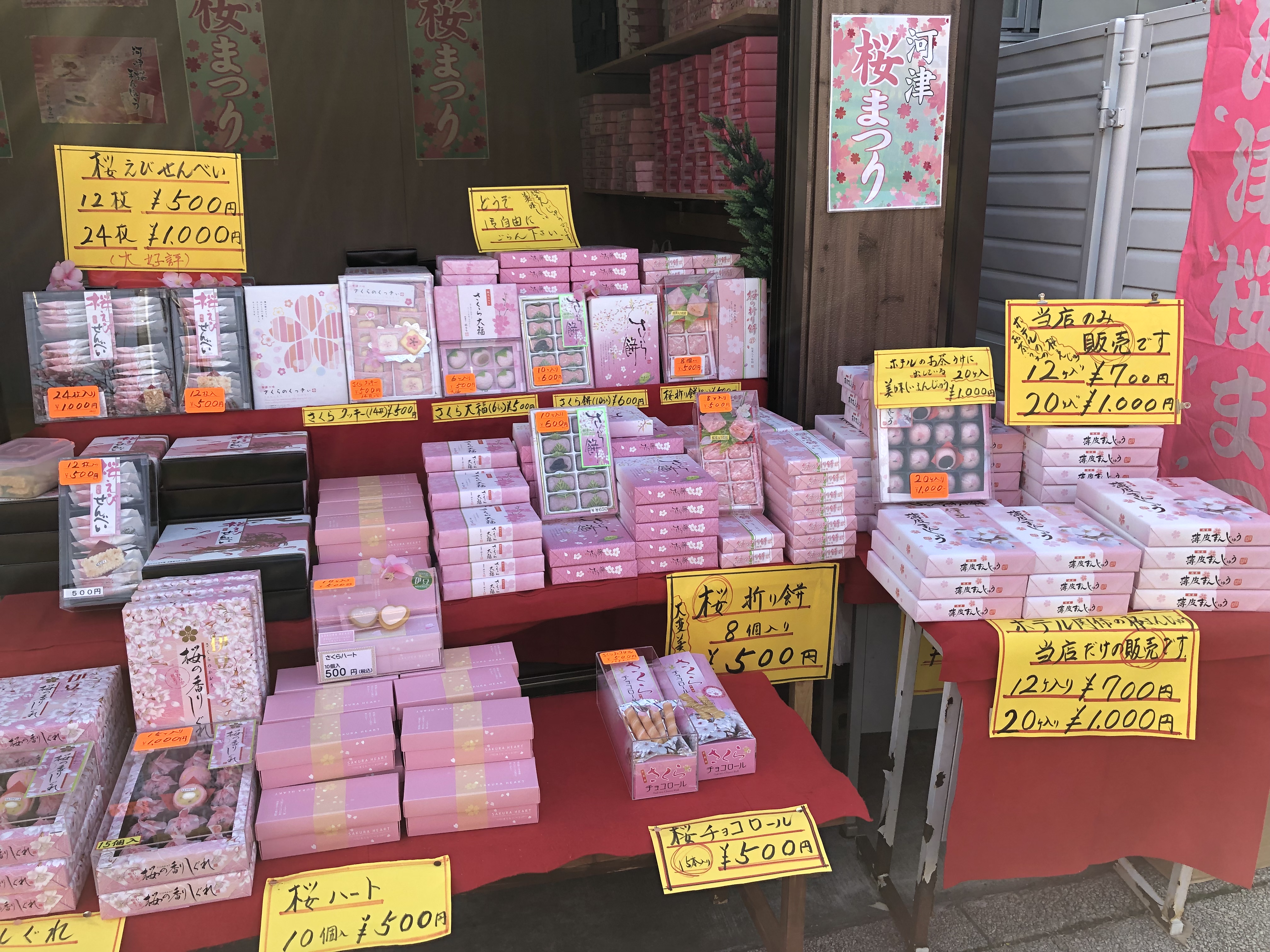 Then when you reach the river you will see the double line of cherry blossoms like a tunnel you can walk through. 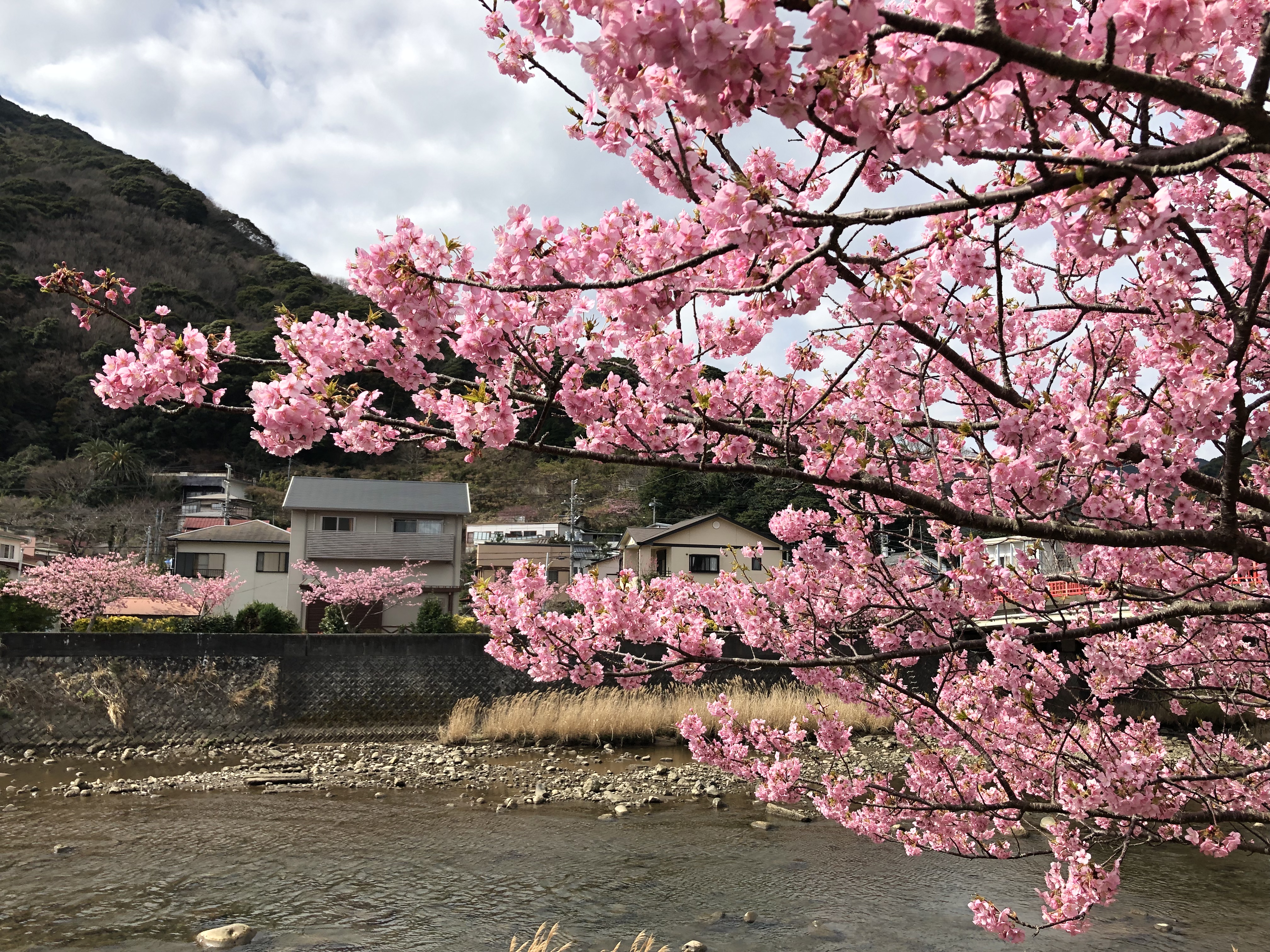 There are festival foods galore to be sampled. I personally love Taiyaki, a warm pancake-like sweet in the shape of a tai (aforementioned red snapper fish) filled with anko (red bean paste). At the Kawazu Zakura festival everything is Sakura related, so the taiyaki is pink, and the anko is too! The sweet paste inside also has cherry blossom leaves in it, and is “sakura” flavoured, I think it has a slightly salty taste.

Sakura ice cream was yummy too! 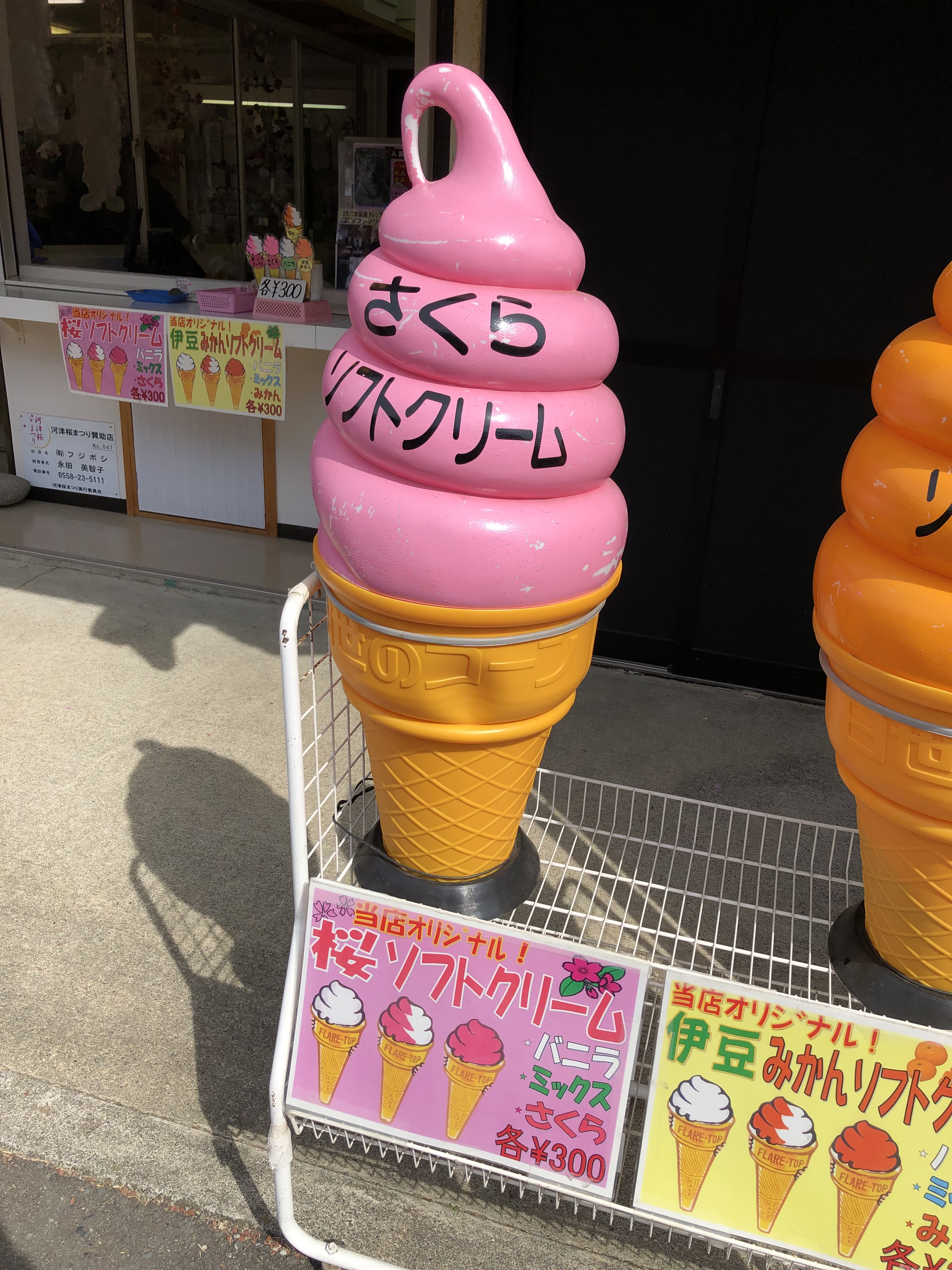 You can also get Ama Senbei, actually this was my first time trying it. Senbei is a rice cracker and an Ama (literally “sea woman”) is a woman whose job it was to dive to the bottom of the sea to collect shellfish. The Ama senbei is huge, and comes in different flavors, including ebi (shrimp) ika (squid) sazae (horned turban shellfish) and, you guessed it, sakura! 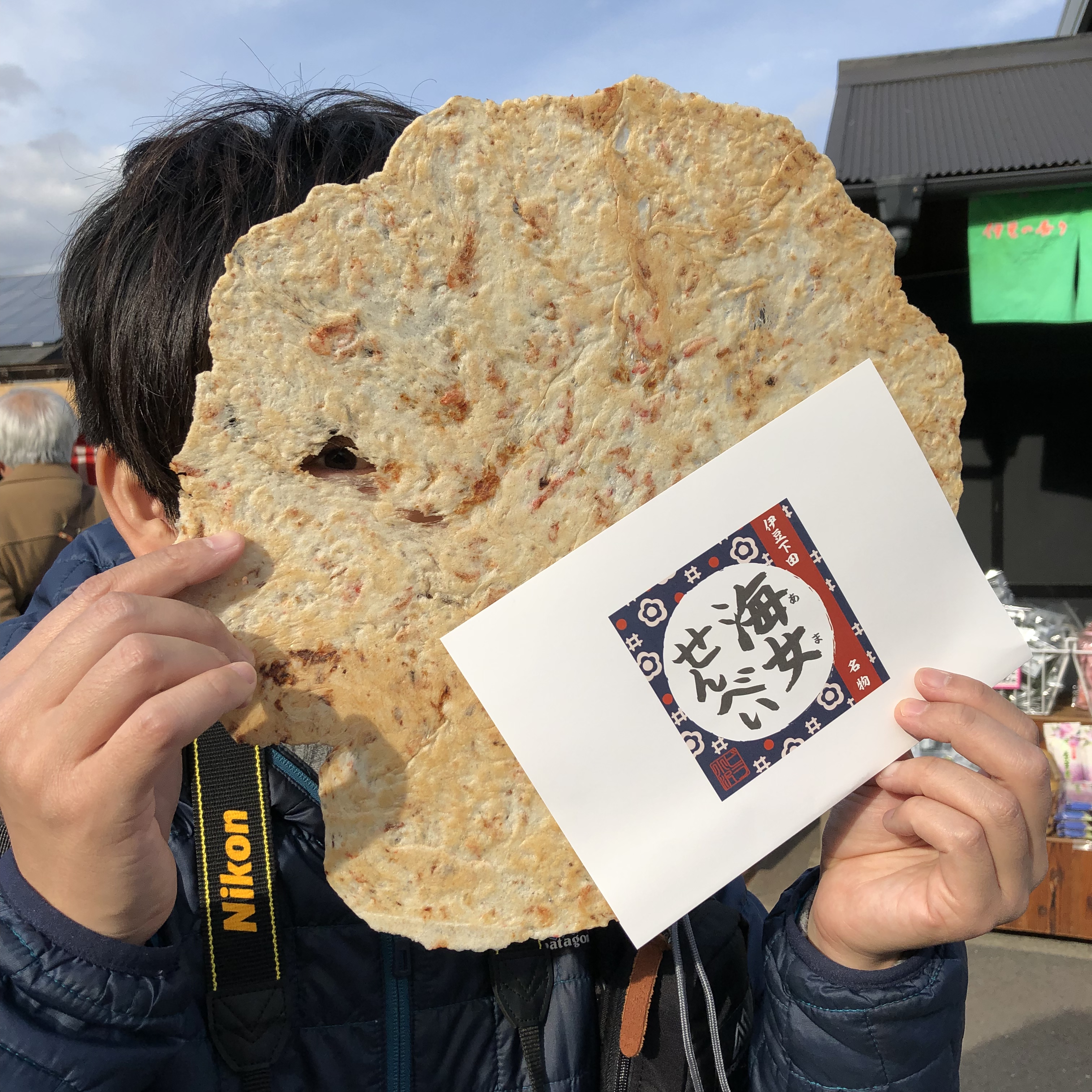 Hubby also got nihonshu (Japanese rice alcohol) and Ayu no shioyaki (salt roasted sweetfish on a stick) which he said was meccha umai (totes yummy) and I got an old favorite festival food choco banana (chocolate covered banana on a stick. Seán tried some of the banana!). 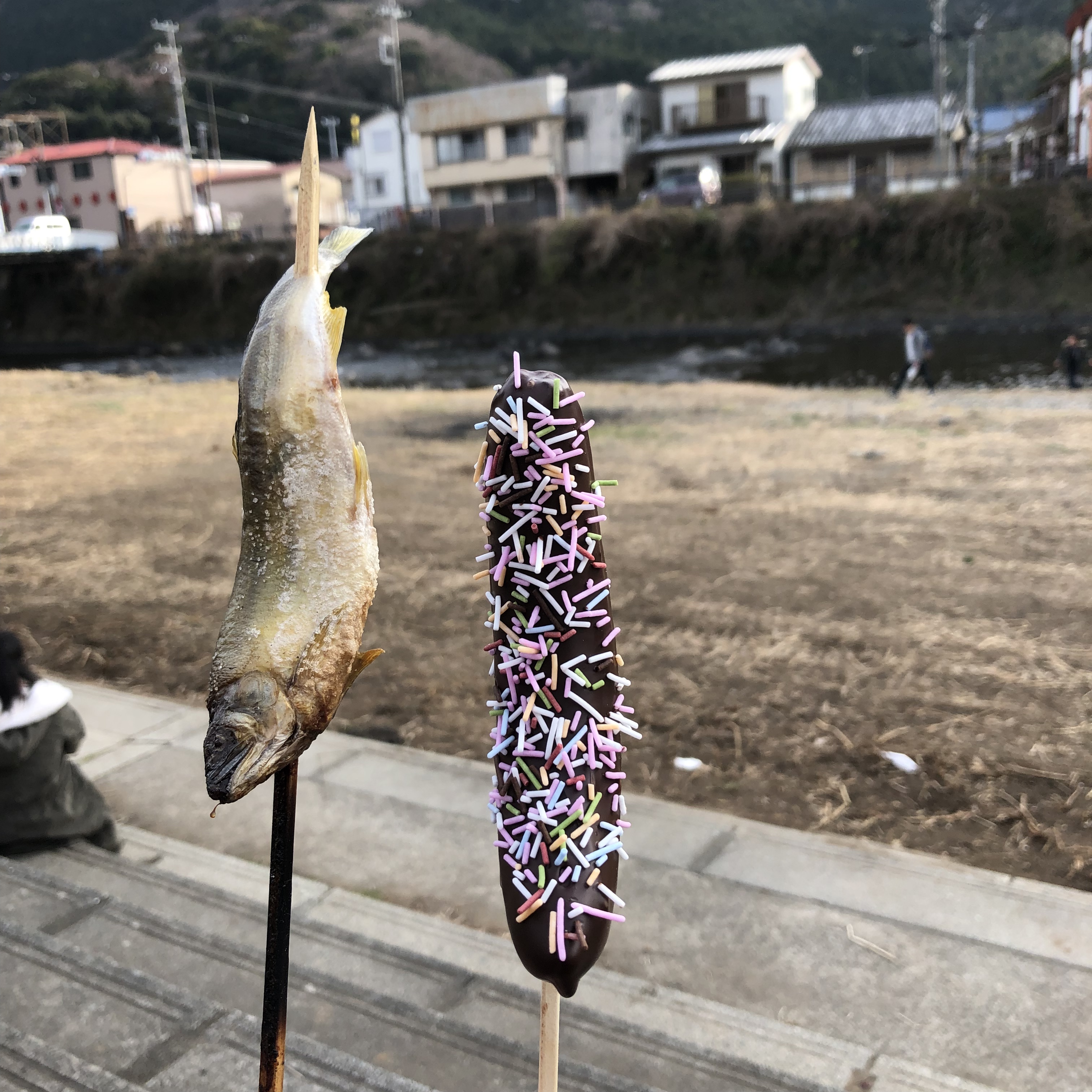 All in all a wonderful day and a highly, highly recommended Japanese festival! My favourite so far. 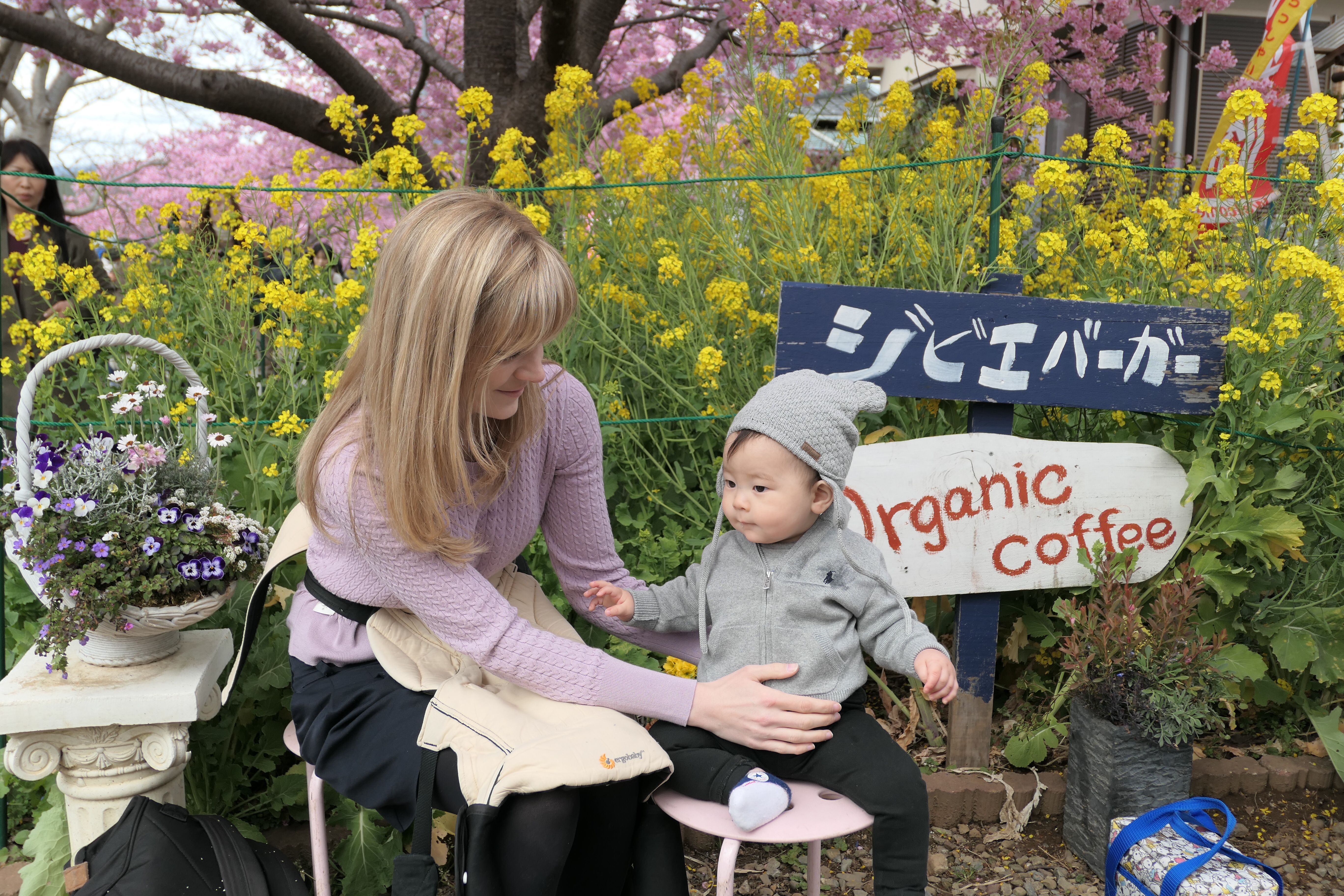 We made a video of our trip to the festival!

Check out our channel